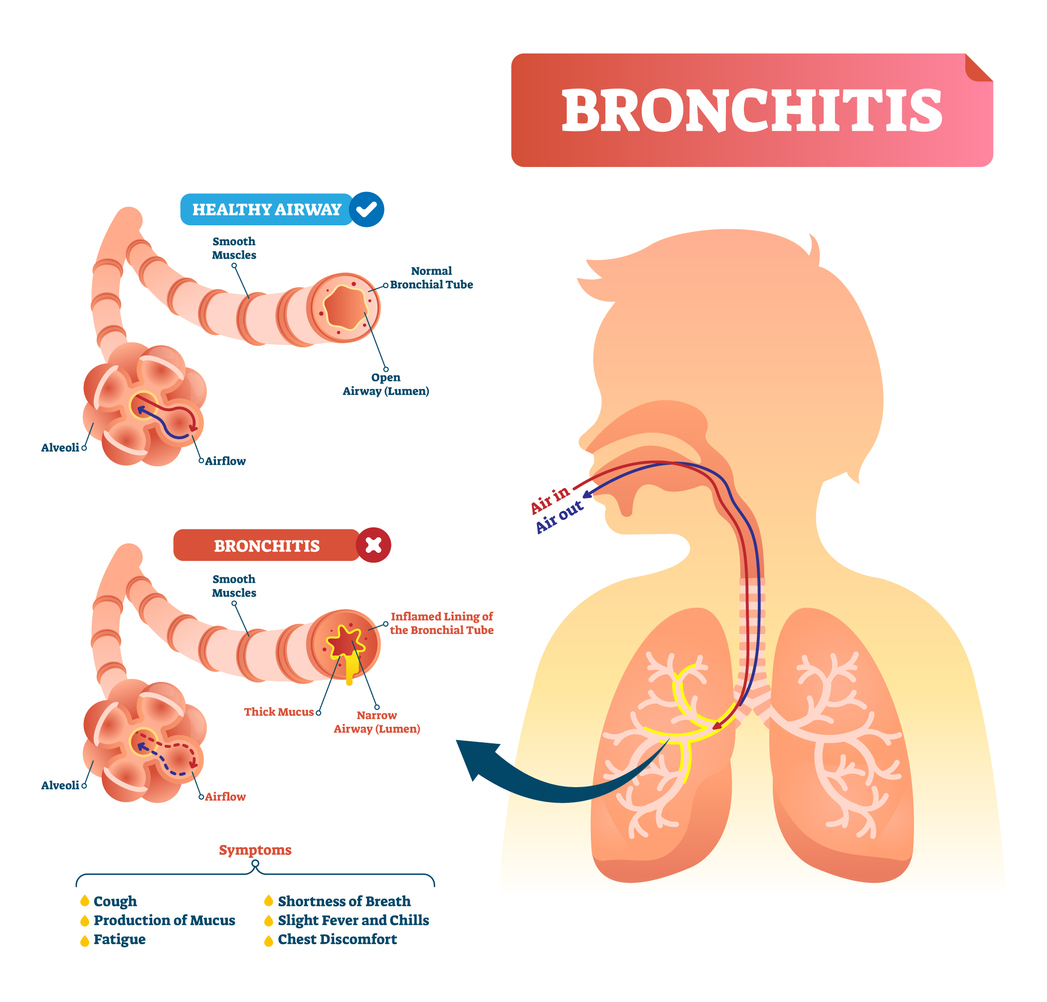 Bronchitis is the inflammation of your bronchial tube lining – the air passage linking your mouth and nose with your lungs that carries air to and from your lungs. It can be either acute or chronic.

Acute bronchitis is a prevalent condition that often develops from cold and respiratory infections, while chronic bronchitis (more severe form) usually occurs due to smoking.

Let’s talk about what happens in your lungs during bronchitis and where you can go in Wellington to get treatment for your bronchitis.

What Happens in Your Lungs During Bronchitis?

Bronchitis is also known as an infection of the lower respiratory tract. Both viral and bacterial infections can cause bronchitis. Nearly 95% of bronchitis cases are caused by viruses, while bronchitis caused by bacteria is uncommon.

When the walls of the bronchi get inflamed, you develop a cough. Initially, the cough is dry, but when the mucus-producing goblet cells of inflamed bronchi produce and excrete more mucus, your cough becomes productive with mucus. The swelling of airways also narrows them, allowing less air to pass through, and causes wheezing, shortness of breath, and chest tightness.

Acute bronchitis lasts for 10 to 14 days, and you feel symptoms for about three weeks. However, if the productive cough persists for three months in a year for at least two consecutive years, this is called chronic bronchitis. Chronic bronchitis can further cause the obstruction of the airflow causing chronic obstructive pulmonary disease (COPD).

How does a Doctor Manage Bronchitis?

Typically, the treatment of bronchitis depends on the type of bronchitis you have. Usually, acute bronchitis may not need treatment or sometimes get better with over-the-counter drugs. However, chronic bronchitis – also considered COPD – is not curable but its symptoms can be managed with a variety of treatments. These treatments may include:

If you think you or your loved one has chest tightness, wheezing, shortness of breath, and other discomforting symptoms, don’t hesitate to contact our primary care physicians at Advanced Medical Clinic. Our highly skilled experienced and compassionate providers will offer your proper treatment for your bronchitis so that it doesn’t develop into pneumonia. Our providers know that each person’s illness is different, so they offer a highly personalized and evidence-based treatment plan.

For an A to Z listing of common conditions and treatments available, browse our interactive patient education center.

At Advanced Medical in Wellington and Royal Palm Beach, Florida, we offer a high standard of primary and urgent care including internal and family medicine.